Title: There Is A Circus In My Head 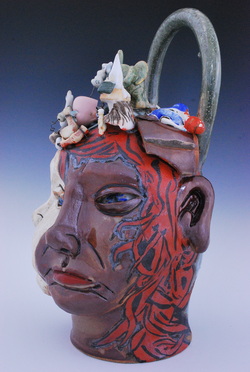 This double headed facial sculpture I created at a point in my life were things were hectic and truly felt a circus of emotions and thoughts all parading around in my head constantly.  So instead of writing it down in a journal i made a sculpture with broken shards and a mixed variety of porcelien and other found object, to create a circus on top of this head. 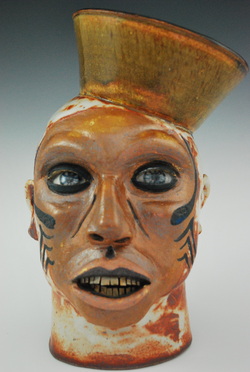 This blue-eyed Egyptian king carries a mysterious aura of  the exotic.  His mouth is poised as if he is on the verge of speaking.  His heavily lined eyes show a confidence and control over his surroundings.  What is he saying and what is his story?  Whatever you decide it is.  Whatever the story the beauty of this piece will surely bring many compliments and be a conversation starter wherever the king finds a home.  He was formed from a lump of clay on the wheel.  His face took form under Levi's hands.  Sometimes the clay leads the potter, and this was just such a journey.  His porcelain eyes  and teeth give a realism to the sculpture.  His  decorated with  under-glaze the fired- glazed and fired again.  He would love to find a home with you.

Everyone who sees this beautiful creation on display remark on the realism of the face.   But, Dreamer wasn't born in reality - he was conceived in one of Levi's dreams and brought to life on the potter's wheel.  A scene from the fears of doomsday where for some reason or other out of all the escaped animals from the zoo a monster gorilla decides to seek me out as its target.    Flames rise up his neck and reach for his eyes as battles take place in his mind- but his serene eyes look on steady and unphased- "Be steady, unmovable always abounding in the grace of the Lord. This was not the first sculpture that was created out of a doomsday dream, were I continually find myself in between my friends and family and certain terrible faits.